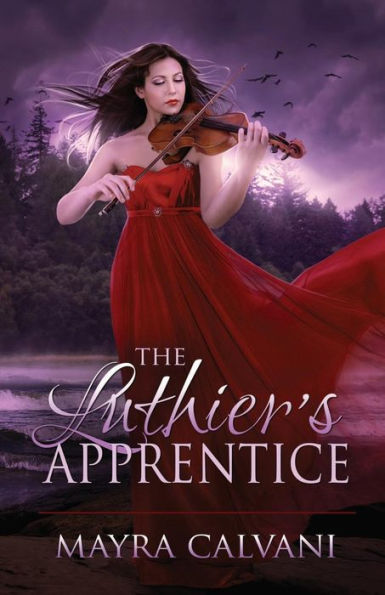 Niccolò Paganini (1782-1840), one of the greatest violinists who ever lived and rumored to have made a pact with the devil, has somehow transferred unique powers to another…

When violinists around the world mysteriously vanish, 16-year-old Emma Braun takes notice. But when her beloved violin teacher disappears… Emma takes charge. With Sherlock Holmes fanatic, not to mention gorgeous Corey Fletcher, Emma discovers a parallel world ruled by an ex-violinist turned evil sorceress who wants to rule the music world on her own terms.

But why are only men violinists captured and not women? What is the connection between Emma’s family, the sorceress, and the infamous Niccolò Paganini?

Emma must unravel the mystery in order to save her teacher from the fatal destiny that awaits him.

Get your copy today!

“After the sudden disappearance of her violin instructor and mentor from a locked room, Emma, a very talented musician, begins an investigation that will reveal family secrets she never thought existed. Secrets that involve her grandfather’s unmatchable talent as a luthier, a strange locked room she is never allowed to go in, and a famous violinist from the 1800s who disappeared over 100 years ago. It will also reveal a magical inheritance that she will have to learn to control.

“She will find allies to help her in her quest for answers. One in the form of her best friend, Annika, who is like a sister to her. And the other in the form of yet another of her instructor’s students, Corey, a boy who almost rivals her own love of Sherlock Holmes stories and has an enviable memory.But Corey also has his own family secrets that will come to light. Ones that involve his father’s death and the disappearance of an old family pet.

“A whole other world will be discovered. One led by a very powerful sorceress bent on ridding the world of male violinists and allowing female violinists to reign supreme. Can they stop her in time to save their beloved instructor, and his fellow prisoners in her world, or will their attempts be futile?

“I love YA books, sometimes more so than adult books. And, being an adult, I have no embarrassment whatsoever in saying this. Mainly because YA books have a certain quality to them that you just do not see in adult books. Or at least most of the time, anyway. And being the book connoisseur that I am, I am always on the lookout for something fresh and different. And this book is definitely different, but in a very good way.

“Disappearing violinists, a pact made years ago, magical singing trees, and a pair of Sherlockians who are definitely after my own heart. What more could you want in a book? Not much, in my opinion.

“This book was beautiful. Especially when the world in which the sorceress lives was revealed. Violins are so graceful instruments, and that is definitely how this story felt.

“I can honestly say that I was definitely trying to find anything at all to critique about this book. But, much to my very pleasant surprise, I could not find one thing. I absolutely loved it, and was very excited hear that this will only be the beginning for Emma. This book was wonderfully written and had such musicality to it. And not just because it had music in it. It read very easily and I definitely would read it again…and again and again.